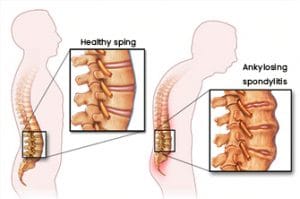 The joints are initially inflamed and this may be followed by progressive stiffness and inflexibility. This condition is more common in males as compared to females and usually occurs in individuals between 16 – 40 years of age.

Ankylosing spondylitis is considered to be a genetic disorder in which the HLA-B27 gene in particular has an important role to play. People with this particular gene have a significantly higher risk of developing ankylosing spondylitis. However, it must be noted that not every person who has the HLA-B27 gene develops this disorder. Thus there are some additional factors, probably environmental, that are involved in the development of this condition.

The initial inflammation that activates the immune system is thought to be triggered by a bacterial or microbial infection. At a later stage, the immune system is unable to turn off this response which continues to attack the body’s own tissues now, in this case, the joints leading to arthritis. This explains the auto-immune nature of the disease.

In Ankylosing Spondylitis, Homeopathy can offer significant pain relief to the patients. This holds especially true for cases that are in the early stages of the disease. At this stage, the medication can even help in slowing down the progress of the disease besides offering pain control.

As far as advanced cases are concerned where arthritis has advanced and immobilization of the joints has already occurred, there is nothing much that can be done for the patient except palliating the pain.

Timely treatment can prevent the onset of complications and can also prevent the disease from spreading to involve other organs of the body. In addition, the treatment can also help the patients to manage the feelings of depression, anxiety, withdrawal that many of them suffer from.

Regular exercises, swimming, breathing exercises, gentle stretches, etc. done under the supervision of a physiotherapist combined with Homeopathy can give good results in most cases. Gout is a form of arthritis which is caused by the accumulation of uric acid crystals in joints. In this condition, due to a metabolic dysfunction, there is deposition of uric acid in and around the joints causing severe painfulness, swelling and restricted mobility of the affected joint.

Gout is a disease that results from an overload of uric acid in the body. This overload of uric acid leads to the formation of tiny crystals of urate that deposit in tissues of the body, especially the joints. When crystals form in the joints, it causes recurring attacks of joint inflammation arthritis. Gout is considered a chronic and progressive disease. Chronic gout can also lead to deposits of hard lumps of uric acid in the tissues, particularly in and around the joints and may cause joint destruction. It is often related to an inherited abnormality in the body’s ability to process uric acid.

Gout is an intensely painful condition, which mostly affects only one joint (monoarthritis) at a time, most commonly the big toe. However, Gout may also affect elbows, knees, ankles, wrists or small joints of the hands and feet. The classic history in a patient suffering from Gout is of excruciating and sudden pain, swelling, redness, warmth and stiffness of the joint. Low-grade fever may also be present. The skin overlying the joint can also be swollen, tender and sore if it is touched even lightly. Patients with longstanding hyperuricemia (high levels of uric acid in blood) can have uric acid crystal deposits called tophi in other tissues as well, e.g. the helix of the ear

Homeopathic approach to Gout treatment is more of a holistic approach. Homeopathy helps in controlling the pain during the acute attack of gout as well as helps in preventing the recurrence of such episodes. It helps in reducing stiffness and improves the mobility of the joints. Homeopathy is
very strongly suggested for the treatment of Gout Cervical spondylosis is a disorder of the neck spine where the vertebrae (bones in the neck) and the discs (cushions between the vertebrae) start degenerating. This is also known as cervical osteoarthritis The symptoms of cervical spondylosis are – pain and stiffness in the neck which is usually progressive in nature; pain and numbness that radiates to the arms hands and fingers, headache that starts from
the neck and extends to the back of the head, loss of balance and vertigo (sensation of spinning or whirling with loss of balance)

Homeopathy has a very promising role in the treatment of cervical spondylosis. The long term results of homeopathy are very encouraging. Homoeopathic treatment of cervical spondylosis is dependant upon an important factor i.e. amounts of degenerative changes that have taken place in the bones and the disk. In other words the extent of damage to your spine will determine the speed at which your problem gets cured and also to what extent you get cured. In cases where there are mild to moderate changes in the cervical spine the cure is much faster and the recovery is very substantial. In advanced cases where multiple disk prolapses have occurred, the recovery will be slow and at times will be limited. 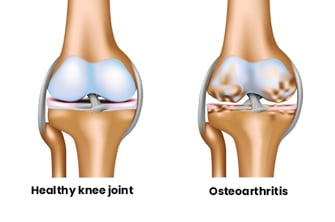 Osteoarthritis is one of the types of arthritis that is caused due to degeneration and
eventually loss of the cartilage of joints. Cartilage is a tissue that covers the inside of the joints and acts as a cushion between the two bones forming a joint.

When the cartilage starts undergoing degeneration, the bone becomes inflamed as its protective covering is lost. This causes pain during weight bearing activities such as standing, walking, etcconditions on which billions of dollars are spent every year for treatment as well as research. Homeopathy has good scope in the treatment of rheumatoid arthritis (RA) especially in the early stages before deformities set in.

Osteoarthritis is a degenerative joint disease where the pathological changes in the joint are almost irreversible. Homeopathic medicine can alleviate the pain significantly but cannot cure the disease completely. Most cases respond well as far as the long-term pain relief is concerned. Homeopathic medicines are definitely suggested for osteoarthritis, especially for early cases where the medicines can slow down the degenerative process and offer considerable pain relief. Rheumatoid arthritis (RA) is a chronic, systemic inflammatory disorder that affects many tissues and organs, but principally attacks the joints. This disease causes inflammation of the

tissues around the joints leading to joint swelling, stiffness and pain. Rheumatoid arthritis (RA) can cause significant loss of function and even minor day-to-day tasks can become an effort for the patients. Being progressive in nature, in the long term, rheumatoid arthritis can lead to joint destruction, severe disability and loss of mobility.

Signs and symptoms of joint affection in rheumatoid arthritis: One of the characteristic features of rheumatoid arthritis is symmetric involvement of joints (seen in many but not all cases) Polyarticular involvement – usually five or more joints are involved (this is highly variable). Over a period of time, more and more joints tend to be involved sequentially Joint stiffness (and even swelling at times) is usually quite marked in the morning (morning stiffness) and it may last up to few hours. Stiffness may also be worse after periods of inactivity like sitting for a long time

Homeopathy address the root cause by managing the inherent imbalance of immune system. Although it require due time to see desired result.