“ Head pain in children“???  Yes, you heard it right, many of us can’t imagine that children can get headaches too. Many parents don’t realize that their children are suffering from chronic headaches as children who are younger than 6 may not be able to describe the symptoms they are experiencing.

About  20 percent of 5-year-olds and About 75 percent of teenagers get occasional head pain, these can be harmless and can be managed with the help of simple treatment and home remedies.

In this post, I will help you understand headaches in children, the types of headaches children can have, the possible causes of head pain and its symptoms, and treatment.

What is the treatment for childhood headaches?

Duration of treatment of headache

The duration of treatment depends on the duration of the child’s headache, its intensity, and the frequency of occurrence of complaint, usually it takes 6 months to 1 year, in a few cases it can take longer too, depending on the factors mentioned.

Common Causes of Headache In Children

It is believed that the contraction of scalp muscles repeatedly can cause head pain. Also if the pain sensors in blood vessels and tissues around them if activated can result in Neurochemical changes in the brain which can also cause head pain.

The headache is commonly caused by

How to prevent headaches in children 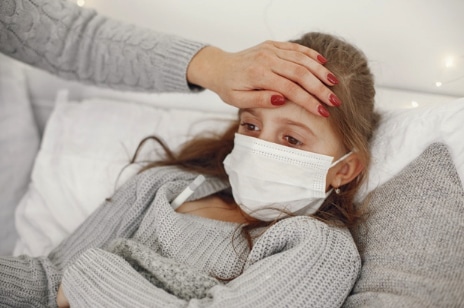 Fever In Children ..Things To Do

Fever in children is Something every parent Observes in their Child, Some child may Experience recurrent History of Fever, Some Child may have Seasonal fever. Some may have long History of Fever

Doctor takes into account in understand the patterns, evolution and associated complaints in fever,  As said, It is the root cause of fever which Need to be addressed rather than only suppressive measure to get rid of fever

Fever is a protective defense mechanism the body employs to fight infection. Fever is manifestation of illness, But Not an illness itself.

When to get cautious

Is speech delay in a child is bothering you ?

In typical 12 months, a baby’s first words usually appear, and by 18 months to 2 years, children use around 50 words and will start putting two words together into a short sentence, By age 3, their vocabulary increases to about 1,000 words, and they are speaking in three- and four-word sentences.

If your toddler hasn’t met those milestones, they may have a speech delay. Developmental milestones help track your child’s progress, but they are just general guidelines. Children develop at their own rate. Just need to ASK these simple 2 questions,

1) Does the child hear normally?

2) Does the child answers the simple questions in different ways? Eg by pointing, or gesturing.

And if the answer to both of these questions is in the affirmative then your child could start speaking in a couple of months, it can be, just the child is among those late bloomers who are preparing to launch with boom!!

A speech delay can also be due to hearing loss or underlying neurological or developmental disorder.

In 1-3months Speech and language skills begin with cooing and crying.

By 2 yrs of age, children know about 50 words and they start putting two words together and make small sentences.

A typical 3-year-old can, use about 1,000 words, call themselves by name, call others by name, ask questions, tell a story, repeat a nursery rhyme, sing a song

Signs of a speech delay

If a baby isn’t cooing or making other sounds at 2 months, it could be the earliest sign of a speech delay. By 18 months, most babies can use simple words like “mama” or “dada.” Signs of a speech delay in older toddlers are:

Although the two are often difficult to tell apart — and frequently referred to together — there are some differences between a speech and language delay.

Speech is the physical act of producing sounds and saying words. A toddler with a speech delay may try but have trouble forming the correct sounds to make words. A speech delay doesn’t involve comprehension or nonverbal communication.

In language delay, there are issues with understanding and communicating, both verbally and nonverbally. A child with a language delay may make the correct sounds and pronounce some words, but they can’t form phrases or sentences that make sense. They may have difficulty understanding others.

Children can have a speech delay or a language delay, but the two conditions sometimes overlap.

If you don’t know which one your child may have, don’t worry. It’s not necessary to make a distinction to have an evaluation and start treatment.

On other side the speech delay

What is the cause of speech delay?

But speech delays can also tell something about overall physical and intellectual development. Here are some examples.

Problems with the mouth

A speech delay can indicate an issue with the mouth, tongue, or palate. In a condition called tongue-tie, the tongue is connected to the floor of the mouth. This can make it difficult to create certain sounds.

A 3-year-old who can comprehend and nonverbally communicate but can’t say many words may have a speech delay. One who can say a few words but can’t put them into understandable phrases may have a language delay.

Some speech and language disorders involve brain function and may be indicative of a learning disability. One cause of speech, language and other developmental delays is premature birth.

Childhood apraxia of speech is a physical disorder that makes it hard to form sounds in the right sequence to form words. It doesn’t affect nonverbal communication or language comprehension.

A toddler who can’t hear well, or hears distorted speech, is likely to have difficulty forming words. One sign of it is that your child doesn’t identify a person or object when you name them but does if you use gestures.

However, signs of hearing loss may be very subtle. Sometimes a speech or language delay may be the only noticeable sign.

We learn to speak to get in on the conversation. It is difficult to speek if no body is communicating with you.

Speech problems are many a times seen with an autism spectrum disorder. And its Other signs may include:

Certain neurological disorders can affect muscles necessary for speech. These include:

In the case of cerebral palsy, hearing loss or other developmental disabilities can also affect speech.

Speech can be delayed due to an intellectual disability. If your child isn’t speaking, it may be a cognitive issue rather than an inability to form words.

Speech disorders can affect a person’s self-esteem and their overall quality of life. Homeopathic medicines aim at a child’s symptoms individually and in a holistic manner, the homeopathic doctor assesses the level and quality of the child’s symptoms, analyses them and prescribes medicine accordingly. Speech therapy along with homeopathic treatment, can help improve speech and reduce symptoms. How ABDOMEN PAIN IN CHILDREN Could Make Anyone a Better Parent

Stomach pain and children both seem to go together.  “MY TUMMY
HURTS”, “MY STOMACH IS PAINING”.  As parents, we have
heard these sentences many times, but someday your child wakes
up in the middle of the night complaining of tummy pain. Do you
tend to ask “do you feel like vomiting”? “Do you have any loose
motions?” “Exactly where does it hurt?”

Now, what do you do?
Stomach pain is the most common complaint in children. And it can
be trivial to life-threatening requiring immediate medical attention.

The common cause of abdomen pain in children are
1. Psychological factors
2. Food-related illness.
3. Medical cause
4. Surgical cause

When should I be concerned about my child’s stomach
pain?
If the child has abdominal pain but otherwise looks well and the
pain is not affecting his routine activities, you can almost be sure
that the problem is not serious. However, if your child is
experiencing any of the following symptoms make your appointment
with the doctor.

1. Frequent constipation
2. Blood in stool
3. Diarrhoea
4. Fever and cough
5. Pain while passing urine
6. If the look of your child causes anxiety,
7. Pain is constant. and severe and it’s lasting more than an hour
8. If your child is less than 12 months.

CONCLUSION: – At last I would like to convey more often in
children its needs to understand their fear, anxiety, unresolved
conflicts, to rule out mild to serious medical and surgical
complications. In homoeopathy, we go in-depth in understanding a
patient during case taking (physical, emotion, intellect and lifestyle)
into account, Thereafter we arrive at a solution that is sustainable
and long-lasting.
Homoeopathy has a large potential to treat many if not all diseases in
this busy stressful world of ours.
“Listen to your body and begin applying a holistic approach to
wellness. Treat the whole being, not just the symptoms”.